Cold and fluEars, nose, and throat

Nasal Congestion: How to Get Rid of a Stuffy Nose 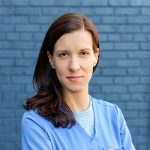 If you’ve ever struggled to breathe from your nose or laid awake at night due to stuffiness, you know how difficult congestion can be. Caused by irritation and inflammation in the nasal passages, a stuffy nose commonly occurs with illnesses like influenza and the common cold, or with seasonal and environmental allergies. Other medical conditions and external factors like smoke and strong smells can also contribute to nasal congestion.

Fortunately, there are a number of medications and at-home remedies that can ease your symptoms. Keep in mind that it’s also important to address the underlying cause of your stuffy nose.

In this article, I’ll explain:

What Is Nasal Congestion?

Nasal congestion, or more commonly referred to as a stuffy nose, occurs when the flow of air in and out of the nose is obstructed, often due to mucus. Nasal congestion usually happens because of inflammation and swelling in the sinuses and nasal passages. If you have a stuffy nose related to an infection like the common cold or influenza, or one related to an immune response like allergies, your irritated nasal membranes produce excess mucus to flush out the irritant. This can lead to congestion in the sinuses.

Common symptoms of nasal congestion include:

Sometimes, congestion in the nasal passages can also cause post-nasal drip, causing excess mucus to build up in the throat. As a result, you may also have a sore throat or a cough when you’re congested.

Why Do I Have a Stuffy Nose?

Broadly speaking, nasal congestion happens when there’s inflammation and swelling in the tissue of the sinuses and nasal passages. This can happen for a number of reasons. Some of the most common medical causes of stuffy nose include:

Occasionally, external factors can lead to congestion, including:

Usually, a stuffy nose resolves on its own with time or once the cause is addressed. Some people experience chronic nasal congestion due to sinusitis, or an infection of the sinuses. Talk to your health care provider or a K doctor if your stuffy nose lasts more than ten days.

Treatment and Relief for Stuffy Nose

Wondering how to get rid of a stuffy nose? Figuring out the cause of a stuffy nose is the first step to alleviating congestion. Take comfort in knowing that it won’t last forever. If your stuffy nose is associated with a viral illness like the common cold, you can expect it to let up within 7-10 days.

Once you work with your doctor to identify what’s causing your stuffy nose, you can treat the symptoms. Commonly, doctors recommend over-the-counter (OTC) decongestants for patients with stuffy noses. These medications work by reducing the swelling in the nose to ease pressure and ultimately reduce congestion. Consider any of the following decongestants for a stuffy nose:

Before you take a decongestant, talk with a doctor. It’s important not to use a decongestant spray in your nose for more than three days—otherwise, it can prolong or worsen your congestion.

Treating stuffy nose due to allergies

If you have a stuffy or runny nose due to an allergic response, whether environmental or seasonal, you may also have symptoms like itchy eyes, sneezing, and a scratchy throat. To relieve those symptoms, you can try allergy-specific medications, such as:

Self care for stuffy nose

Medications aren’t the only route for taking care of your congestion. To relieve your symptoms, you can also try the following at-home stuffy nose remedies:

Preventing a stuffy nose starts by identifying potential irritants. If you have allergies, for example, you can dodge a stuffy nose by taking an antihistamine before being exposed to your allergen—or you can avoid it altogether. When possible, you can also avoid external factors that can contribute to a stuffy nose, like smoke, spicy food, and alcohol use.

Preventing illnesses like the common cold and influenza is another way to prevent congestion. Doctors recommend practicing routine, thorough hand washing—especially before eating or touching your face. It’s also helpful to avoid contact with anyone who might be sick. Get a flu shot every year as well to prevent a stuffy nose associated with influenza.

If your stuffy nose is bothering you for more than ten days and isn’t improving with over-the-counter or home remedies, reach out to a K doctor who can help you determine the cause and best course of treatment.

You should also reach out to a doctor if you have any of the below symptoms, which can indicate an infection:

Did you know you can get affordable primary care with the K Health app? Download K to check your symptoms, explore conditions and treatments, and if needed text with a doctor in minutes. K Health’s AI-powered app is HIPAA compliant and based on 20 years of clinical data.